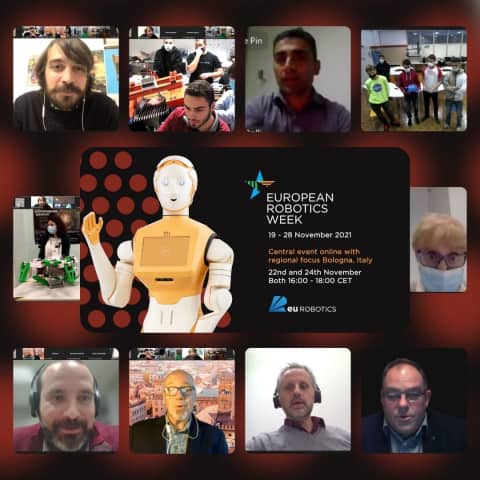 After euRobotics President Bernd Liepert gave his opening address, Alessandro Macchelli introduced those connected to the live event to the University of Bologna, virtual venue for the Central Event. Founded in 1088, ‘Unibo’ can claim to be the oldest university in the western world. Among its many other points of distinction, Bologna was the alma mater of Bettisia Gozzadini, among the first women to receive a university degree and certainly the first woman to teach at a university. Alessandro’s presentation brought the story up to date with an outline of Bologna’s modern-day campuses and its capabilities for robotics education. Following two further well-received presentations by Fiorella Operto from the Scuola di Robotica and Gianluca Palli, also from the University of Bologna, the Opening Session closed with a showcase of this year’s SciRoc Competition, held in Bologna, presented by Daniele Nardi and Valentina Presutti. As well as glimpsing some of the projects in competition, those present also learned how participants were able to take part in SciRoc via one of three modes: physically, by being in Bologna; virtually, by participating remotely, and digitally, by providing their project code to be run in situ.

The ERW 2021 Central Event resumed mid-afternoon two days later with another varied session. First up was an engaging slot in which participants were introduced to winning teams from Italy’s annual National Robotics competition. This year competitors were tasked with presenting responses to environmental challenges under the umbrella theme: Water – Earth – Air – Robot “Save the Planet!” During the session, Emanuele Micheli from the Scuola di Robotica very ably and patiently coordinated the live feeds from three secondary school student teams Volteam from Borgonovo Val Tidone near Piacenza; DAFNE from Jesi, near Ancona, and ARACHNE from Bari. The three teams showcased their projects: a robot to recover plastic waste from lakes and oceans; a helmet with sensors to warn workers about toxic substances, and robotic support for farmers to optimise crop-planting.

Following this encouraging display by emerging roboticists, the event moved on to the related topics of unmanned aircraft systems, and urban air mobility (UAM), more specifically, drones. For just under an absorbing hour, participants were given an absorbing and visually rich overview of what’s already here, what’s possible and what’s coming soon to the airspace in our cities and communities. The first part of the focus on drones was presented by Antidio Viguria Jiménez, Chief Technology Officer for Avionics and Systems at CATEC, the Advanced Centre for Aerospace Technologies, based in Seville, Spain. The ever-growing use of drones that Antidio described threw up many questions concerning safety, certification and regulation. Such questions were anticipated in part two of this focus on drones, by Giuseppe Scannapieco, Drones Project Manager at EASA, the European Union Aviation Safety Agency, who with great clarity offered a concise but vivid summary of the challenges and opportunities presented by the drones, together with a fascinating history of the regulation of the skies and how this continues to evolve.

Finally, and not least, Alberto Bellini from the University of Bologna brought the Central Event to a conclusion with his introduction to EU-supported Knowledge and Innovation Communities (KICs), with a particular focus on the Climate KIC, in which he has been active.

While this may not have been a bricks-and-glass, physical-handshake Central Event, Bologna 2021 offered much to enjoy and think about – and certainly much more than we could have hoped during dark moments of the pandemic. President of euRobotics Bernd Liepert closed the event and thanked the University of Bologna, local organisers, the euRobotics ERW event team and all presenters and their institutions who had taken part and supported the Central Event.