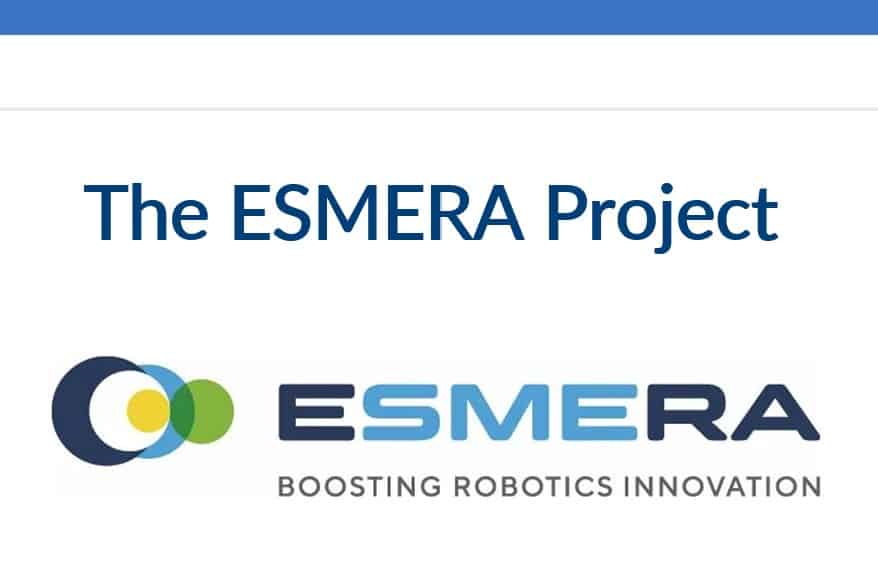 ESMERA (or European SMEs Robotics Applications) is a Horizon 2020 project aiming to accelerate the progress of European robotics SMEs to the market. By the end of the project ESMERA will have funded 32 Experiments to produce prototype demonstrations to real-world challenges in industrial settings.

ESMERA (www.esmera-project.eu) is a European project that has successfully delivered 16 new and exciting robotics applications into eight real-world challenge areas and brought together leading technology providers with genuine problem owners.

ESMERA (or European SMEs Robotics Applications) is a H2020 project that started in 2018 and will soon finish. The project, which is coordinated by LMS at the University of Patras in Greece, is an FSTP or flow-down funding project aimed at accelerating the progress of European robotics SMEs to the market. By the end of the project ESMERA will have funded 32 Experiments to produce prototype demonstrations to real-world challenges in industrial settings.

One of the unique aspects of ESMERA is that the challenges have been provided by end-user organisations (“Challenge Providers”) who have a critical need that cannot be sourced from the current marketplace. Importantly, these Challenge Providers also provide a first market for the commercialisation of robotic products or services after successful demonstration of the prototype systems.

The Challenges were set in eight application areas across two calls. ESMERA found Challenge Providers in each of these areas but, unusually, also allowed applicants to bring their own Challenge Provider, provided they represent one of the eight areas but were not connected to the applicant. In the first call a total of 12 Experiments were funded in a first phase while in the second call 20 first phase Experiments were funded. Following this proof-of-concept phase, the projects were competitively evaluated and down-selected to half the number to go on to the Demonstration and Commercialisation phase. The spread of Experiments is illustrated in the Figure below:

Technical support was provided by four Competence Centres based in Eibar in Spain, Munich in Germany, Paris in France, and Patras in Greece. Importantly, ESMERA also provided support to the post-project commercialisation aspects of the Experiments, including the scale-up beyond the first customers. The emphasis of this aspects is demonstrated by 3 of the 7 project partners being dedicated to this support and mentoring.

Videos of the various experiments together with a final project summary video can be found on the ESMERA YouTube channel. The key numbers for the project are shown in the Figure below:

The ESMERA Consortium Competence Centres are the Laboratory for Manufacturing Systems & automation (LMS), the Commissariat a L’Energie Atomique Et Aux Energies Alternatives (CEA), the Technical University of Munich and Tekniker.