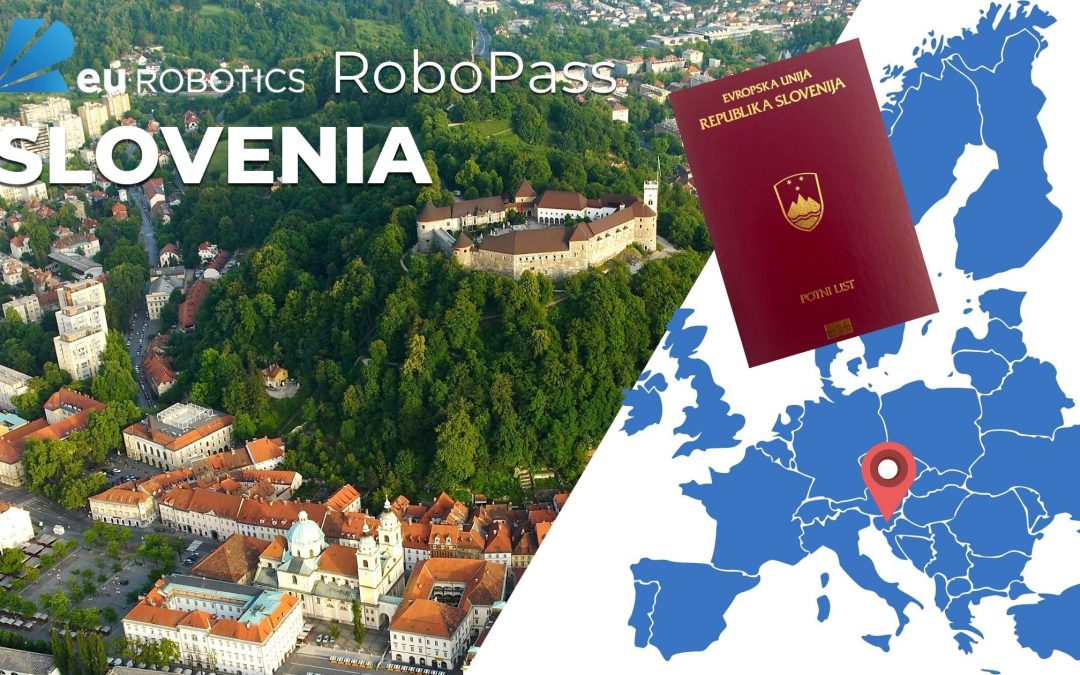 After resting from its European Grand Tour in January, RoboPass resumes the journey this month with a visit to a nation of Alps, forests, winter sports, cycling champions and technology – Slovenia.

Robotics are deeply rooted in Slovenia, a small, highly-developed central European country of two million people, bordered by Italy, Austria, Hungary, Croatia and a short Adriatic coastline. Indeed, the early stages of Slovenia’s journey with robots pre-date its independence from Yugoslavia in 1991 and subsequent membership of the European Union from 2004. Today, robots are well-installed across Slovenia’s economic base. Figures from the International Federation of Robotics (IFR) show Slovenia among the leaders in robotic innovation within Central and Eastern Europe. On the now-familiar metric of installed robots per head of population, Slovenia’s figure of 183 per 10,000 workers is well ahead of the equivalent European average (123) and the US figure (111) according to the International Federation of Robotics (December 2021). Within the automotive industry, Slovenia ranks 7th in the world for its share of robots per 10,000 employees. Within manufacturing overall, Slovenia appears among the top 20 highest proportion of installed robots per 10,000 employees.

In 2016, Slovenia was the location of the European Robotics Forum (ERF). Three principal Slovenian institutions – the University of Ljubljana (Faculty of Electrical Engineering), the Jožef Stefan Institute (IJS) and the Slovenian Academy of Sciences and Arts (SAZU) – came together to organise that year’s ERF in Slovenia’s capital, Ljubljana.

Putting a precise date on the origins of any technology or industry can be arbitrary. The earliest documented roots of Slovenia’s robotics industry can be traced back to 1912 when architect Maks Fabiani patented a design for a mechanical aid to assist mountain climbers. More generally, the robotics industry began in the 1970s with the development of two early models Goro and Roki. In an embodiment of the entwined relationship between research and industry that reflects euRobotics itself, Slovenia’s first domestically-produced industrial robot Goro 1 was developed at IJS and manufactured  by Gorenje, the multinational consumer appliance group headquartered in Velenje, Slovenia. Following the launch of Goro 1 in 1980, the subsequent Goro series of robots were deployed for painting, enamelling and varnishing in Gorenje’s core business of kitchen appliance manufacture (1).

Within a year of Goro 1’s debut, the University of Ljubljana’s Faculty of Electrical Engineering went into collaboration with another major industrial concern, Iskra, to develop Roki, a high-precision robot that entered into service machining induction meter components in 1987.

By the end of that decade, the robotics sector’s growth picked up with the development of industrial robot manipulators. Today, in keeping with Slovenia’s status as an advanced industrial nation with a strong tradition of high-tech development, many enterprises now produce components used in robots and robotic work cells, as well as automated production lines, both for domestic industry and for export (2).

UL Electrical Engineering’s RoboLab has been involved with major EU-funded research projects for more than 20 years.

Robotics users can be found across the major economic sectors in Slovenia, notably in automotive, wood, pharmaceutical, electrical, domestic appliances and food & beverage.

Japanese industrial giant Yaskawa has a substantial footprint in Europe, with operations in several countries. In 2019, Yaskawa opened a robot manufacturing facility in Kočevje, south-eastern Slovenia, which has become one of Europe’s notable high-tech industrial hubs. This is intended to supply 80% of demand n Europe, the Middle East and Africa for the company’s Motoman industrial robots designed for high-speed joining, packaging and general handling applications. Yaskawa first launched operations in Slovenia in 1990.

Renault’s Slovenian production subsidiary Revoz is Slovenia’s sole car manufacturer and its number one exporter. By a considerable margin, Revoz is the largest user of robots in Slovenia, with over 650 units, and some parts of its operation are entirely robotised.

On a smaller scale within the SME sector, motor parts manufacturer KLS is seen as the most robotised company in Slovenia, with a production workforce of 150 people and 240 robots.

Robotics education in Slovenia now spans almost half a century, following the launch of the first graduate programme in industrial robotics at UL’s Faculty of Electrical Engineering in 1976. An undergraduate course was introduced two years later.  A Bologna 2nd level (broadly, Master’s) programme in Robotics was introduced in 2012. It is almost certainly no exaggeration to say that the progenitor of robotics education in Slovenia was Alojz Kralj, Emeritus Professor of Biomedical Engineering, Biomechanics and Robotics, at UL. Co-author of a 135-page teaching manual on industrial robotics in 1980, Alojz Kralj was the driving force behind the creation of the Laboratory of Robotics (RoboLab) at UL the following year.  One of the key themes in Kralj’s own research was the development of robotics and electrical stimulation to assist mobility for people with spinal injuries. Nearly half a century later, in 2016, a Slovenian student team from RoboLab achieved success at Cybathlon, an international competition created with the aim of driving forward the development of assistive technologies for people with disabilities.

At a state level, the Slovenian government has just adopted (6 January 2022) a new nine-year strategy for the digital transformation of the economy. ‘Automation and robotization’ is one of six technology pillars supporting the new strategy, which sets an ambitious target. By 2030, it aims to see Slovenia become a leading hub for advanced digital technologies in Europe. The key metric for this is for Slovenia to be among the top three European countries in the Advanced Digital Technology Adoption Index. By comparison, Slovenia placed 13th among the EU27 Member States in the European Commission’s Digital Economy and Society Index (DESI) for 2021, fractionally above the EU average. The contribution of robotics to Slovenia’s ambitions was underscored by the Slovenian Minister of Digital Transformation, Mark Boris Andrijanič during a visit to the Bela Krajina business incubator in Slovenia’s south-east high-tech hot spot: “Automation and robotics contribute to greater productivity and competitiveness in the global marketplace, while improving our wellbeing, which is why investment in high-tech companies is crucial today.” With  education and skills in focus, one of the business incubator’s main activities is to provide training events on digital ICT technologies, including robotics educational events at primary schools.

Finally, given the closening links between robotics and IA, it is worth mentioning that since 2020, Slovenia has been home to UNESCO’s first International Research Center for Artificial Intelligence (IRCAI).

Author: Steve Doswell. With special thanks to Prof. Dr. Marko Munih, Head of RoboLab, University of Ljubljana for providing much valuable source material.