Pinocchio all’Opera: an orchestra of robots 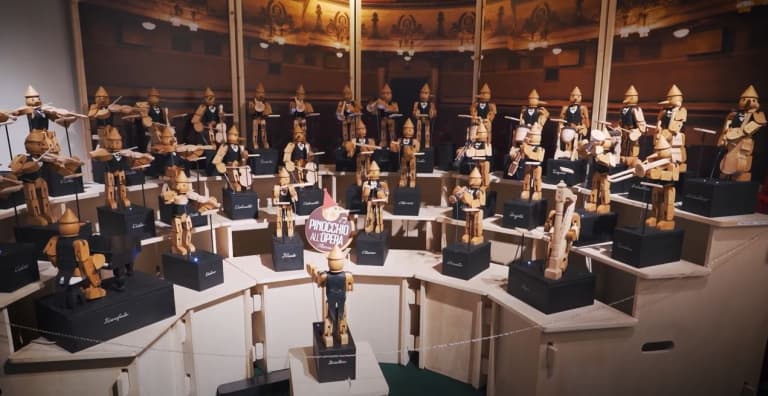 The worlds of art and robotics have come together in an imaginative fusion of tradition and innovation that provides a showcase for Italian ingenuity.

At the Palazzo Ricasoli in Florence, Italy, an extraordinary exhibition has been designed to highlight two icons of ‘Made in Italy’ – Pinocchio and the Opera – and bring visitors, young and old, closer to opera, music and technology through the sculptures of one of world’s most famous puppets, Pinocchio. And euRobotics members at the Scuola di Robotica were instrumental (!) in creating an orchestra of robot Pinocchios.

Based on an idea by Davide Battistini, Secretary General of the Carlo Collodi National Foundation, the exhibition presents in three rooms a tour of Italy in which values recognised throughout the world can be found in a small way: craftsmanship, music – opera – and advanced technology, all inspired by Pinocchio.

A carpenter, like Geppetto (the elderly woodcarver creator – and ‘father’ of Pinocchio), Mauro Olivotto, known as Lampo (‘Lightning’ in Italian), has built beautiful artefacts, Pinocchios, out of pine wood from the Dolomites World Heritage Site, and wanted to represent the great interpreters of opera.

Then, Davide Battistini explains, “another of the values we have in Italy was added, the genius of robotics. Italy is technology, evolution, creativity. We have robotised our orchestra of 40 elements that are autonomous, 40 Pinocchios, each playing a musical instrument independently. And we wanted to give voice to Giuseppe Verdi, with a meeting between the children who visit the exhibition and a Giuseppe Verdi Pinocchio who speaks and at the end of the speech gives the name of the children in melody”.

Members of euRobotics at the Scuola di Robotica brought autonomy to the orchestra of Pinocchio at the Opera, working on every type of movement of the Pinocchio orchestral players, in order to make the act of playing as close as possible to reality.

Fiorella Operto from the Scuola di Robotica explained: “Pinocchio is a famous puppet not only in Italy, it is a fable known all over the world. The very structure of the fable, a wooden puppet who, thanks to the education of his father and of many loving characters, becomes a human, is interesting and recalls robotic fables thousands of years old.

The project was immediately very interesting for Scuola di Robotica because it is based on one of the ideas on which Scuola di Robotica was founded, namely the close collaboration between the humanities and the technical-scientific world linked to robotics, to unite these two apparently very distant fields, bringing robotics closer to the world of art, craftsmanship, literature, theatre and opera.

“This project has allowed us to enter museums through this transdisciplinary collaboration.

We started by working on this project with Davide Battistini and with craftsman and carpenter Mauro Olivotto, known as Lampo (in Italian, Lightning) to understand how the puppets were constructed, and what possibilities there were to give them a certain mobility and autonomy.

“Davide Canepa and Luca Gilardi of Scuola di Robotica presented a feasibility study that worked closely with Lampo to apply the automatisms to parts already built, and how these parts should be modified to add motors, joints, sensors, in two words, electronics and robotics.

“The carpenter understood the project and made some modifications to the puppets and through prototyping they were able to motorise them by incorporating electronic and robotic components. All this originated in the laboratory world of the School of Robotics but working in close collaboration with the craftsman.”

The Pinocchio at the Opera exhibition is open at Palazzo Ricasoli in Florence, albeit with interruptions because of Covid. A tour of Italy and Europe is already planned.

Watch the video of Pinocchio at the Opera presentation