How the euRobotics Board works 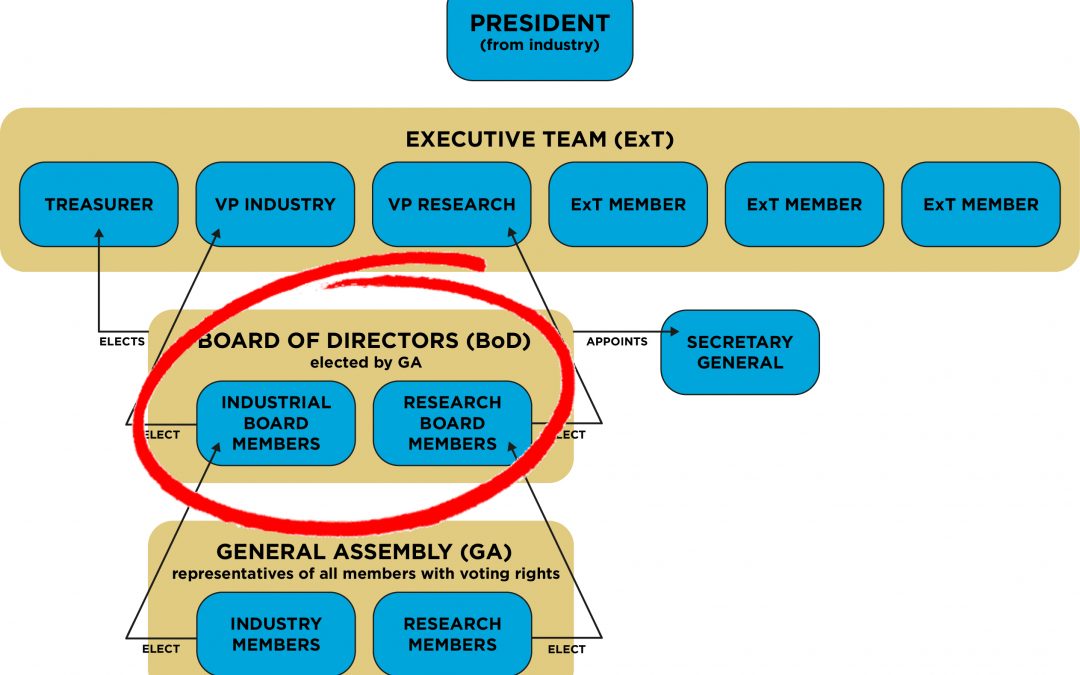 How does euRobotics work? With a smile, we might say ‘We work quite well, actually, but there’s always room to improve…’. But that’s a topic for another time. In the newsletter during the months to come we will put the spotlight on how different parts of the association operate. Some things you may know and some details may be new to you. Either way, we want you and all of our Members to have a clear and accurate picture of euRobotics’ structure and operations. We start this month with a focus on the Board of Directors.

euRobotics is a community of hundreds of robotics stakeholders with Member organisations of many types across Europe, from end-users, industry, research, and academia. Each Member organization has voting rights. There is an additional category – Associate membership, typically for organisations representing regions. Associate Members do not have voting rights. As a community, euRobotics relies on its Members of all types to provide the work and energy which enable it to thrive. There is no individual membership. Only organisations can be Members. However, those organisations need to be represented by individuals and it’s these individuals who vote and who contribute their ideas, energy, passion and commitment.

As the Association’s ultimate decision-making body, the General Assembly meets annually. Every full Member may attend and take part in the Annual General Meeting (AGM), plus any Exceptional General Meetings on the rare occasions when these are held. However, this would be too large a group to meet and conduct the Association’s business on a more frequent and routine basis. That’s why euRobotics has other groups to run its affairs on a monthly, weekly or day-to-day basis, each with its own distinct role, mandate and place within the governance structure by which euRobotics is constituted, governed and managed. These are the Executive Team, the Secretary General and the Office team, and the Board of Directors.

It’s important to have a balanced Board of Directors to direct and coordinate the activities of euRobotics at a strategic level and to represent it externally. Since euRobotics exists to serve its Members’ interests, the Board’s composition is chosen to represent all its Members, with the main groups being Industry and Research. In order to keep a good balance of the different Member types, a further requirement is to make sure different subtypes within Industry and Research are represented. Within Research there are higher education establishments (HES) and research and technology organisations (RTOs). Within Industry there are: larger companies; SMEs developing robots or robotic related technology; partner companies, such as component providers but also investors, and end users who will benefit from technological progress. Each of these types of Member needs to be represented on the Board. And for those who are elected to the Board by their fellow Members, listening to and gathering the views of other Members in the same category of membership are part of their representative role.

This highlights an important distinction between the role that individuals play when they represent their individual Member organisation at a General Assembly of euRobotics, and the role they play as elected Directors, who each represent a category of Members and serve the interests of the whole of euRobotics and its Members. When transacting Board business, Directors represent the wider community, not just their own Member organisation.

The board is currently made up of 24 Directors, 12 from Industry and 12 from Research, with some specific roles, two Vice Presidents (VPs, one each for Industry and Research) and a Treasurer. The President is not among the elected Board members but is appointed by the GA based on the recommendation of the Board. The VP roles are filled by election from within the Board, typically with experienced Board members and senior representatives of the whole Board. This focus on experience and authority is important, because the VPs are more likely to be asked to represent euRobotics at external events and have a larger role in coordinating the Board as a whole. Since early 2020 the frequency of Board meetings has increased: before the pandemic there were only a handful of physical meetings per year, but since Covid, the need for more frequent Board updates and discussions has become clear. Now there are regular monthly Board update meetings plus some longer meetings to allow for Board workshops or more intensive discussions.

At a more operational level, to be agile and able to make efficient and more rapid decisions, an Executive Team (ExT) of six Directors now is also in place, comprising the VPs and Treasurer plus three other Directors, with the Industry/Research composition still in balance. The ExT members contribute considerable time to euRobotics’ work including, at present, a 1.5 hour online meeting each week together with the President and the Secretary-General.

Board Directors are elected by the membership of euRobotics at the General Assembly via a simple mechanism that respects the arithmetic of representation: Industry members elect their Directors to represent them, while Research members elect their own Directors to represent the interests and perspectives of the Research membership. There’s one further refinement to the electoral calculus: candidates are nominated and voted for so that all subgroups are represented by the new Board. Once elected, a Director serves on the Board for three years. In order to maintain continuity but also to allow for renewal and to refresh the Board’s composition, the Board runs to a three-year election cycle in which one third of Board positions (four each for Industry and Research) become due for re-election each year. At the end of the three-year term, a Director may be re-elected for a further three years.

The next Board election will be held at the General Assembly on 27 June in Rotterdam, the day before the start of ERF 2022. Member organisations may put forward their candidates. In order to do this, they need to submit a form. The completed forms are then used to create a “catalogue of candidates” which is then circulated to the Members before the General Assembly. The deadline for the 2022 candidature is 31 March 2022.

Next month, the Newsletter will delve further into the workings of euRobotics with a focus on internal operations and the roles of the Secretary-General and the Office team.