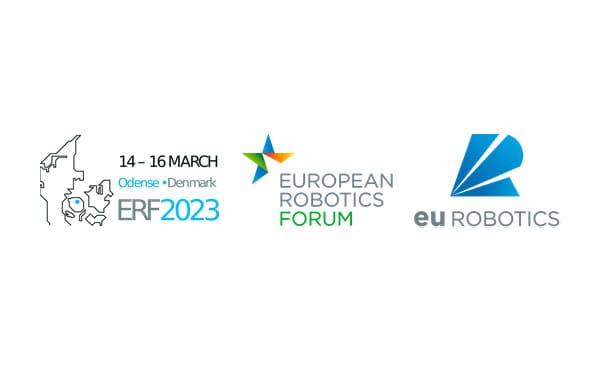 The next European Robotics Forum will take place on 13-16th March 2023 in Odense, Denmark. Earlier this month, the ERF Programme Committee adopted its chosen theme:

“Odense revisited – how to build a community for commercial successes”

Here we take a closer look at the next ERF’s host city. The words are provided by Christian Schlette, who leads the ERF organising team in Odense.

After decades of successfully building the world’s largest container ships for Maersk the renowned Odense Steel Shipyard at Lindoe closed its gates in 2012. This left Odense in a similar position to many other European cities which had historically been shaped by heavy industries – and which then set out to master a restructuring around knowledge and tech-driven businesses.

The Lindoe shipyard was already “high tech” with significant developments in robotization and digitalization, including the donation of the Maersk Mc-Kinney Moller Institute (MMMI) as part of the University of Southern Denmark (SDU) in 1997. Since MMMI’s mission was to support the demanding operations of the shipyard with research in robotics and AI, the researchers engaged in this vivid exchange had developed a closely-knit network as well as a very application-orientated mindset focused on industrial requirements and commercial viabilities.

It was around the time the shipyard closed, when many founders of today’s most prominent companies in the cluster, who have been trained in this unique network and mindset, set out to establish their companies. In 2015, the commercial potential of robotics became tangible for the whole community when US-based Teradyne bought Universal Robots. More start-ups and more investments followed. And again, the closely-knit network and mindset prevailed, and the founders became mentors and investors helping others in the community to flourish.

Today, the robotics cluster in Odense consists of more than 130 companies, which are closely supported by the cluster organization “Odense Robotics” as well as the Odense municipality to grow and maintain the network and mindset, and to strengthen its international visibility and impact. The support ranges from startup programs to C-level exchanges and investor fairs. In addition, many of the companies’ commercial successes are often still directly supported by the R&D carried out at the local research institutes.

The European Robotics Forum 2023 returns to Odense just over ten years since the city was previously the host, at ERF 2012. This time, together with our friends and guests we want to look back, illustrate and share how the robotics cluster in Odense was built and how it works today.