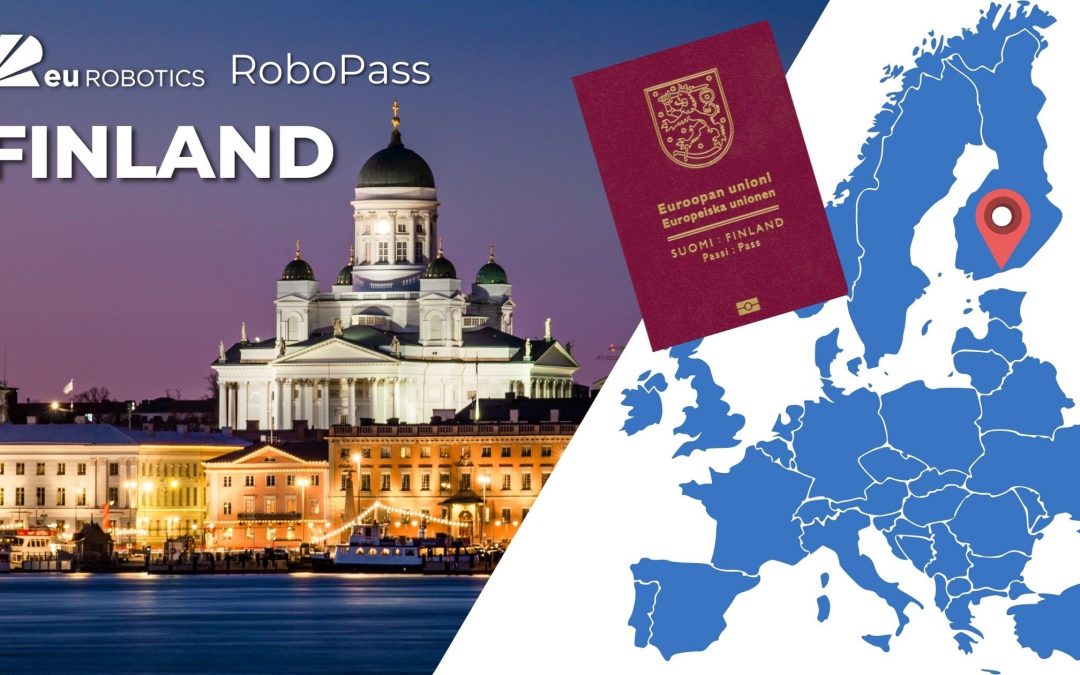 Several countries have a vibrant robotics sector and that’s especially true of Finland. RoboPass headed east along the Baltic Sea to find out what’s happening and some of the factors that have led to this vibrancy.

Robotisation in Finland has been, and still is, mostly defined by industrial robotics. Instead of individual robots, Finland exports larger robot systems, many of these being turnkey solutions customised to special end-user needs in niche applications. In global terms, a quote from a robot-system integrator describes the robotics export business well: “We are developing special manufacturing systems that no-one else dares/wants/or is crazy enough to do”.

One typical aspect of exported Finnish robot systems is their size, which in many cases is big or even huge. Heavy welding and material handling systems of global leaders Pemamek are used around the world to improve the productivity of large metal structure manufacturing. A similar case is the one of Blastman Robotics, a company producing large abrasive sand-blast cleaning systems which can be the size of a railway wagon.

Finland has always had an innovative approach to use of industrial robots. This is due to the nature of manufacturing in Finland. Instead of a large volume of consumer goods, we produce large investment goods in mechanical workshops. This means the production batches are small and manufacturing systems need to be flexible. The same trend can be seen in the use of industrial robots, which are just a means for making innovative tools and processes more productive. One example is the non-destructive robot inspection systems by Stresstech Oy.

Manufacturing robotics simulation and offline programming knowledge also has a long history in Finland. In 1990, Delfoi Oy installed the first offline programmed arc welding robot for the company Tampella. Since then, both software and computer hardware have developed a lot, but the original idea of saving time and resources in complex robot programming is still the same. Nowadays most of the robot programming is done by software, the operator simply verifies the generated paths and that the selected parameters are correct. Among many other simulation and visualisation solution providers, the Delfoi portfolio is also based on robotics simulation software developed by Finnish company Visual Components.

The adoption of robotics in Finnish manufacturing started in the early 1980s in mechanical workshops. The robotics focus moved to electronics assembly with the rise of Nokia’s cellular phones in the 1990s. The biggest boom in light-assembly robotics was during the first decade of the 2000s. Ever since Nokia changed its course towards cellular networks, their influence in robotics has been quite modest. During the last 40 years, robotics in mechanical workshops with small-batch manufacturing has been the trend in Finland, and it will be the robotics business also in the foreseen future. All innovations that help or will help small batch manufacturing are of most importance in Finnish robotics, both in software and in hardware.

Even if the investments of the manufacturing sector in robotics in Finland are modest, the future in general still looks bright. Several innovative startup companies are creating disruptive innovations in robot tools and end effectors in the manufacturing sector. Hyperion Robotics is developing extrusion tools and new materials for effective concrete printing. Add Composites is working in composite materials where their tool enables flexible CRP laying on complex surfaces. Furthermore, other startups are working in service robotics.

Looking a bit further into the future of the robotics sector in Finland, we expect it to increase considerably. Programming is already part of the curriculum for children in primary schools. Municipalities responsible for implementing the curriculum – like the one of the city of Lahti – have created robotics education roadmaps. A leader in this development is clearly the city of Riihimäki, that has developed a robotics curriculum including all educational levels from pre-school to secondary upper education. Every child in Riihimäki studies for a minimum of 250 hours of robotics during their primary school years. What these children will be able to do in the future is beyond our imagination!